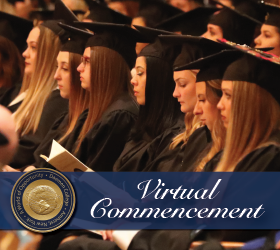 AMHERST, N.Y. – Daemen College celebrated the Class of 2020 in virtual undergraduate and graduate commencement ceremonies that were livestreamed on Aug. 15 on the college’s commencement website.

President Gary Olson presided over Daemen’s first-ever virtual commencement, a move that was made in response to the COVID-19 pandemic. Graduates, family, friends, and members of the Daemen community joined together to watch the undergraduate ceremony held at noon, followed by the graduate ceremony at 4:30 p.m.

Daemen’s virtual commencement was the culmination of a spring semester that was transformed in March when Daemen successfully transitioned to remote learning due to the coronavirus crisis. The 69th annual ceremonies highlighted many of the traditional elements of the college’s in-person commencement.

In addressing the graduates, President Olson said, “Now more than ever, educated citizens are being challenged to reaffirm, champion, and put to good use the values and skills we all share as educated citizens. Our collective future depends on a populace of critical thinkers. It depends, in part, on you. As college-educated citizens, you have a heavy responsibility and it all starts today.”

As part of the undergraduate ceremony, Sydney MacInnis of Renton Wash., who earned a bachelor’s degree in business administration with a marketing specialization, was announced as the recipient of the Charles L. Lumsden Award, the college’s most prestigious academic honor presented to the student with the highest GPA throughout their undergraduate years.

In a special video message for graduates, NCAA President Mark Emmert, considered one of the most influential leaders in U.S. higher education and a long-time advocate for student academic success, congratulated the Class of 2020 and emphasized the vital role they will play in society.

“Probably at no time in your life going forward is there going to be a need for more leadership, more creativity, more innovation, more thoughtful thinking than at this exact moment in your life, and that’s exactly what we need from you and what the world is going to be asking of you,” said Emmert, who looks forward to serving as Daemen’s undergraduate commencement speaker in 2021. “You are going to find innumerable opportunities to be engaged, to be an important part of societal change, to be an important part of solving big problems, and creating a new way for all of us to interact, to think, and to do our work.”

Commencement speaker Amherst Supervisor Brian Kulpa, who leads Erie County’s second most populous suburb, applauded graduates for their tenacity and courage and noted that they are starting their careers at a time when their professional abilities are needed now more than ever.

“This historic time is an extraordinary opportunity for you – it is an opportunity to demonstrate you have the skills, talents, and remarkable strength for professional success,” said Kulpa, who received an honorary doctorate of humane letters from Daemen. “Go out and find ways to do things better in a world that is reinventing itself. The world has never more amenable to change. With all that has happened, your graduating class has developed the unique capacity and abilities to thrive and deal with profound change, qualities that the world and your profession deeply need.”

For the conferral of degrees by President Olson, the virtual ceremonies featured a slide for each graduate that included their name, degree, major, academic honors, veteran or honors program student designations, and a photo of the graduate if available. Dr. Michael Brogan, senior vice president for academic affairs and dean of the college, announced each graduate’s name and degree received.