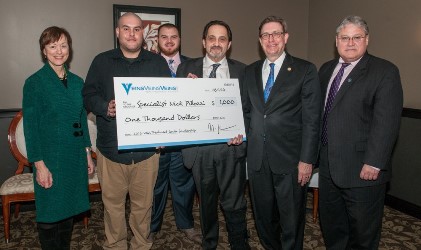 AMHERST, N.Y. – Daemen College student veteran Nicholas Pilozzi has been selected as the first recipient of the new Karamanoukian Scholarship established with a generous gift from board trustee Dr. Hratch Karamanoukian and his wife, Karen Karalus Karamanoukian.

“As a strong supporter of our veterans and our country’s military, I’m pleased to award this scholarship to a veteran as inspiring as Nick and to offer him financial assistance so he may achieve his educational goal at Daemen,” said Karamanoukian, a vein specialist and director of the Vein Treatment Center. “This gift will also add to Daemen’s commitment to provide student veterans the resources and support they need at the college, which has been a key focus of President Gary Olson and Vice President Michael Brogan.”

Four $1,000 scholarships will be presented annually to two student veterans in their final year of study, and also to two physician assistant majors. Award recipients will be selected based on individual merit and financial need.

“Dr. Karamanoukian has been an invaluable advocate for our veterans returning from war, and I would like to thank him for his kindness and support to help me pursue my degree at Daemen,” said Pilozzi. “It has been a very long road to recovery for me since being wounded in Afghanistan and to attend a college like Daemen during this time has been a dream come true.”

Deborah Scott, interim vice president for institutional advancement at Daemen, noted, “We’re extremely grateful to Dr. Karamanoukian for his generosity and scholarship support that will provide much needed assistance to students.”

Pilozzi will receive a bachelor’s degree in history from Daemen this year and will then go on for graduate studies at Arizona State University. He aspires to become a college history professor and to write about U.S. and world military history.

A U.S. Army veteran, Pilozzi served in Afghanistan, where he was the only one of 11 to survive a helicopter crash and was later seriously wounded while on a reconnaissance mission. He received several accolades for his service and bravery, including a Purple Heart.

“The process of reintegrating from military to civilian life after experiencing war can be extremely difficult for veterans, but having people like Dr. Karamanoukian and those at Daemen lend their support helps immensely,” he said.

Pilozzi’s heroic actions in Afghanistan are featured in Jake Tapper’s New York Times best seller, “The Outpost: An Untold Story of American Valor,” which is currently being made into a movie.

A City of Tonawanda native, Pilozzi resides in Grand Island.