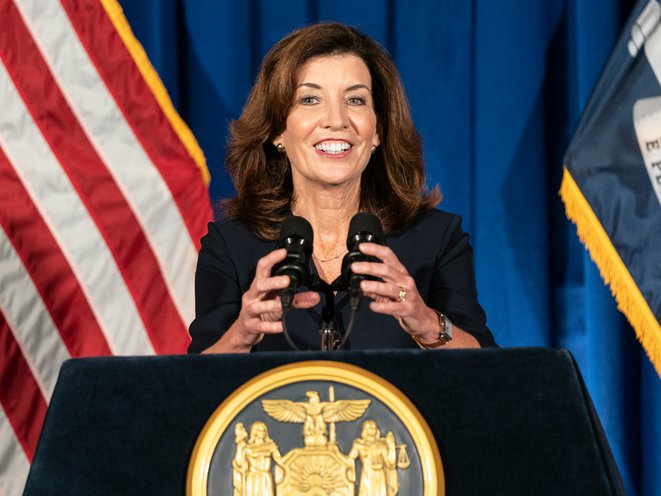 A new New York State law will help improve the treatment of thousands of people with autism spectrum disorder and those with behavioral health needs in the state.

Influential in securing the passage of the bill and lobbying for the governor’s signature were Daemen faculty members Deborah Napolitano, an associate professor in the Department of Applied Behavior Analysis (ABA), and Vicki Madaus Knapp, chair of the department.

The legislation needed Governor Kathy Hochul’s signature by the end of Dec. 31 to avoid a pocket veto – and signed the bill on Dec. 30.

“This was a successful grassroots campaign,” said Napolitano. “We can look back more than five years and point to many key relationships we developed to get to this point.”

The bill – which had been introduced to the state legislature on multiple previous occasions – passed the New York State Assembly and Senate unanimously in 2021. It was sponsored by Crystal Peoples-Stokes, majority leader of the Assembly who represents District 141, which includes Buffalo.

Faculty point to key allies in State Senator John Mannion of Syracuse, chairman of the Committee on Disabilities, who advocated for the legislation – as well as Sen. James Skoufis, representing the 39th District downstate, who sponsored the bill.

The expansion to the scope of practice will help expand the behavioral health treatment available in the state.

What’s more, the law will act as an invitation to highly trained professionals in behavior analysis who currently do not pursue licensure in New York due to unnecessary and outdated restrictions, said Napolitano and Knapp.

Prior the new law, New York was the only state requiring licensure for behavior analysis that restricted treatment to a single diagnosis – autism. As such, a severe shortage of behavior analysts left many populations with behavioral conditions underserved.

“Now there will be more opportunities for professionals with this highly specialized training,” said Knapp. “They can draw on the range of their education and skills.”

Proponents of the bill also say an influx of behavior analysts – as well as new interest in the profession – will better serve those with autism spectrum disorder, recently estimated to affect 1 in 44 boys, per the Centers for Disease Control and Prevention.

Behavior analysts help those with behavioral conditions build skills, which can potentially reduce the need for medication.

As experts in the field, Daemen ABA faculty receive many calls from school districts, agencies, and organizations that serve individuals with a variety of needs, not just autism, to provide behavioral assessment, intervention, and training to staff.

“There were many areas where we could not use our training and skills in New York,” said Knapp.

Several Daemen faculty were also active with the New York State Association for Behavior Analysis (NYSABA) in galvanizing support for the legislation.

Vanessa Patrone, an assistant professor in the ABA Department at Daemen, is the marketing chairperson with NYSABA. Napolitano was a member of NYSABA’s board of directors, and was a past chair and current member of the NYSABA legislative committee. Knapp is secretary of the executive committee of NYSABA.