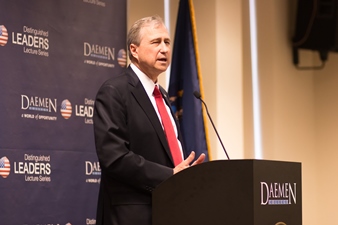 “At this point in the campaign, voters are reacting out of frustration and not necessarily looking for experience but for change,” said Cox, at the hour-long discussion on March 3. “Many voters want a candidate they believe will invoke change and bring the country together in hopes of governing effectively.”

A longstanding leader in the domestic and international policy arenas, Cox
stressed the importance of electing a president knowledgeable on handling policy issues. “Whether it’s ISIS, the Syrian crisis or other unsettling situations in the world today, the next president must be a leader who will give a strong voice to foreign and domestic policy matters,” he said.

Historically, pointed out Cox, a unified, bipartisanship government has been key during some of the most challenging times faced by the U.S. and something he believes will be fundamental in the next presidency.

When asked about Mitt Romney’s speech on current Republican front-runner Donald Trump, Cox referred back to the importance of showing unity. “The message should be one that unifies the Republican Party and gives it direction,” he said.

Chairman of the state’s Republican Party since 2009, Cox has been active with the GOP for more than 40 years at state and national levels, having worked on four presidential campaigns, and served three presidents and four governors.

Cox concluded his discussion by noting he’s confident there will be positive change as “we look toward the election, and we will to begin heal ourselves as a country.”