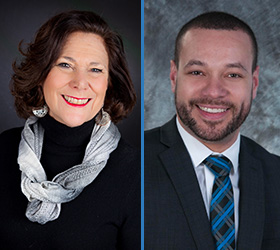 AMHERST, N.Y. – At its September meeting, the Daemen College Board of Trustees approved the appointment of Lana Benatovich and Johnathan Graves to the college’s board.

“We are pleased to have such accomplished leaders in our community join the Daemen board, and we are confident they bring great insight to advancing this exceptional college,” said John Yurtchuk, chair of the Daemen Board of Trustees.

Benatovich is president of the National Federation for Just Communities of Western York, an organization dedicated to overcoming racism, bias, and bigotry by building a just and inclusive community through education, advocacy, and engagement.

She has served on the boards of St. Bonaventure University and the Network of Religious Communities, and has also served as a commissioner on the Commission on Citizens’ Rights and Community Relations for the City of Buffalo. She is past chairperson of the Erie County Coordinating Council on Children and Families and is past president of the Buffalo Council on World Affairs.

Benatovich has received numerous accolades for her work in the community, including the Leadership Buffalo Inclusion Award, and the Women of Distinction honor from the Girl Scouts of Western New York, and she is a Western New York Women’s Hall of Fame honoree.

Graves serves as assistant vice president at Five Star Mortgage, having previously held the same position at First Niagara Bank/Key Bank. Prior to this, he was relationship development manager at Unyts.

Before being named a Daemen trustee, Graves was a member of the college’s Community Advisory Board. He currently serves on the St. Joseph Collegiate Institute Board of Trustees and its Advancement Committee.

He holds a master’s degree in sports administration and a bachelor’s degree in communications, both from Canisius College.