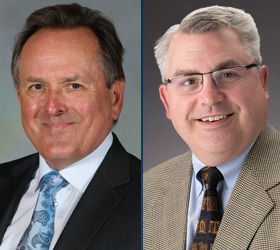 AMHERST, N.Y. – The Daemen College Board of Trustees has elected John Yurtchuk as board chair and appointed Stephen Zenger as a new trustee.

“We are pleased to have two such distinguished leaders in our community serve in these roles and are confident they will contribute great insight and experience to our board,” said Dr. Thomas Stewart, immediate past chair of the Daemen Board of Trustees.

A widely known and accomplished leader in the Buffalo Niagara region, Yurtchuk is an owner and chairman of Calspan, where he was instrumental in developing the company’s new state-of-the-art flight research facility in Niagara Falls.

He also founded Matrix Development Corp. and has developed, financed, and constructed several million square feet of commercial real estate in Western New York, Florida, and the New York City metropolitan area. Prior to entering real estate development, he was a loan officer on Wall Street, a corporate economist, and an instructor at local colleges.

In addition to his appointment as chair of Daemen’s board, Yurtchuk is chair-elect/vice chair of the Buffalo Philharmonic Orchestra Board of Trustees and serves on the boards of Eyes Across America, SwitHeart Animal Alliance, and Friends for Felines. He is also former chair of the American Red Cross Greater Buffalo Branch and past board member of the Albright-Knox Art Gallery.

Yurtchuk, a resident of Williamsville, earned master’s and bachelor’s degrees in economics from the University at Buffalo.

Zenger is president and CEO of Zenger Group, which has been a leader in Western New York’s printing industry for more than 30 years. He joined the family-owned business full-time after earning a bachelor’s degree in communications from SUNY Buffalo State.

Active in the community, Zenger currently serves on the board and executive committee of the Buffalo Niagara Partnership and the Westminster Economic Development Initiative, and is past chair of the SUNY Erie Community College Graphic Arts Department Education Council.