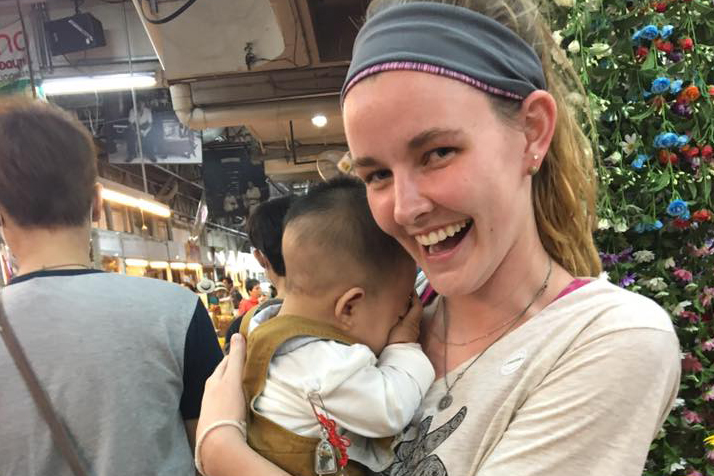 It’s not often that American students get to work alongside a two-time Nobel Prize nominee and bath an elephant during the course of a work week. Daemen student Monica Schubbe, a physician assistant major, had these opportunities while studying abroad in Thailand.

Schubbe spent nearly a month in Thailand working with the Development and Education Program for Daughters and Communities (DEPDC), which is a non-governmental organization that works to prevent trafficking of children and women or other exploitative labor situations along the border of Thailand and Burma.

“While working at the school, we helped the children with their English and worked with the founder, a two-time Nobel Prize nominee, Sompop Jantraka, to build a tree house for the children,” said Schubbe.

Teaching in Thailand was a unique experience compared to working in American schools and presented certain challenges.

Schubbe said, “We taught at an elementary school which was a very open building. Street dogs wandered in and out of classes, children roamed freely, classes were often taught outside on mats, and there wasn’t a set schedule. It was hard at times because of the lack of a schedule, but this is one example of the Thai culture we grew to love.”

There were several experiences that impacted Shubbe. Although she did not stay with a host family, her time spent in hostels proved valuable.

“I met people from almost every continent who were very interesting,” said Schubbe. “Just about every person we talked to were taking time while they were young to travel and explore what the world has to offer.”

The language barrier was an ever-present challenge.

“Communication was easier in Bangkok where many people spoke English,” Shubbe said. “As we headed north, almost no one spoke English. Luckily, we had a translator with us for that part of our trip. Overall, I did have to learn how to express myself without speaking, which was a big challenge.”

“I learned a lot about challenging myself and how to communicate with people who do not speak the same language as me,” said Schubbe. “This trip was a great way to see the world in a different perspective and I feel it prepared me for my future.”

Schubbe was quick to note that Daemen's Global Programs office was instrumental in her study abroad success.

"Not only did they assist in booking our flights, they came into our class and taught us about cultural practices, safety, packing, and a number of other things that helped make our trip successful," said Schubbe.

Schubbe's immediate plans include a trip to South Africa to shadow a friend who is practicing and teaching as a physician assistant in Johannesburg and a trip to the Dominican Republic with Students Without Borders.